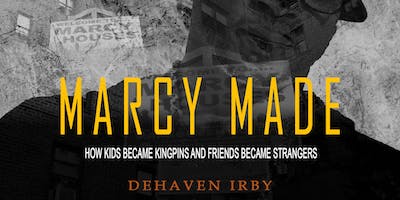 Be the first to watch a special event viewing of the  documentary Marcy Made. The story about DeHaven Irby and Jay-Z, directed by Courtney Baynes. This story details their kinship, involvement with the drug game and how a decades long friendship went south when Jay-Z's career took off while Dehaven was facing kingpin charges....Best friends became strangers!
The documentary answers questions on why brotherly love, that lasted for decades, turned into a global threat from Jay-Z on Dehaven's life by calling him a 'snitch' in his song, 'No Hook' from the American Gangster album, inspired by the movie, ‘American Gangster' starring Denzel Washington.

There will be a meet and greet plus a Q&A at the end of the screening. Included with this purchase are a cocktail mixer and hors d’oeuvres.

Is there a dress code?
A strict dress code is not enforced.

Will you have security?
Security will be on site during the event.

Will DeHaven be there?
DeHaven will be at the event and will answer questions after the screening.

What is the location?
Firelight Studio
247 Water Street
Brooklyn, NY 11201
Parking is minimal, so we suggest for attendees to use public transportation.

How many screenings will there be?
There will be a Marcy Made screening tour. Locations and dates will be announced soon.

Would the audience be able to ask questions to DeHaven?
There will be a panel discussion with DeHaven, the director and producers.

Who are able to participate on the panel?
The panel will consist of DeHaven Irby, Baynes, Monica Barrette and moderated by Tone Viera. Supporters like yourself, along with local/national media and city officials will be able to ask question comfortably from your seats.

Will the documatary be released on a streaming service like Amazon and Netflix?
The Marcy Made documentary will be released on a digital platform for streaming. Details will become available as we approach the release.