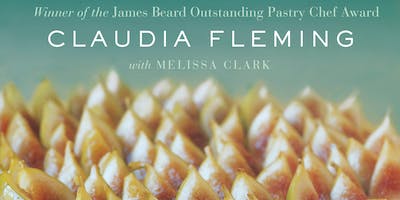 Join us for this special event, featuring the oh-so-talented Claudia Fleming, chef/owner of the North Fork Table & Inn, as she celebrates the re-release of her classic cookbook, The Last Course!
Tickets to this event include a copy of Claudia's book, and will feature a cooking demonstration with Claudia herself, as she hosts a Q&A to answer all of your burning questions. Afterwards, you will have an opportunity for a meet and greet with Claudia as she signs books.
You do not want to miss this event!
"Claudia Fleming is a renowned name in the pastry world, acclaimed for having set an industrywide standard at New York City’s Gramercy Tavern with her James Beard Award–winning desserts. When she first published her dessert cookbook, The Last Course, it reached dizzying new heights of popularity and praise. Now, for the first time, it is available again for collectors and cooks alike.
Fleming’s desserts have won a range of awards because they embody her philosophy of highly satisfying food without pretension, a perfect balance for home cooks. Using fresh, seasonal ingredients at the peak of their flavor, Fleming creates straightforward yet enchanting desserts that are somehow equal to much more than the sum of their parts. The classic elements of these recipes have withstood the test of time.
Born on Long Island, Claudia moved to New York City to pursue a career as a dancer. She supported herself by working in restaurants, including at Jonathan Waxman’s Jams and Danny Meyer’s Union Square Café. During her tenure at Union Square Café, Claudia worked at various stations in the kitchen, eventually gravitating to the kitchen, where pastry became her new calling. In 1991, she went to study pastry in Paris, where she also did a stint at Fauchon.
After returning to New York, she delved into pastry making at Montrachet, TriBeCa Grill and Luxe. In 1994, Danny Meyer and Tom Colicchio hired Claudia as pastry chef when they opened Gramercy Tavern.
In 2006, she and her husband Chef Gerry Hayden (formerly of Charlie Palmer’s Aureole and Amuse, who passed away in 2015) opened the North Fork Table & Inn, bringing farm to table dining to Long Island and putting the North Fork on the map.
Claudia received the James Beard Foundation’s Outstanding Pastry Chef for 2000.  Pastry Art & Design named her one of their 10 Best Pastry Chefs in 2000. Her work has been celebrated in publications such as The New York Times, Town & Country, Art Culinaire, Bon Appetit, Food & Wine, Martha Stewart Living, New York Magazine, Time Out New York and Self. Claudia has been a judge on Beat Bobby Flay, Chopped, Top Chef: Desserts and is one of the most respected pastry chefs in the country."
*PER MURRAYS CHEESE POLICY, WE DO NOT ALLOW TRANSFERS OR REFUNDS FOR OUR CLASSES