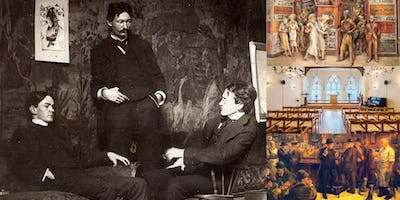 The Art of Real New York: Through the Eyes of NYC's Most Rebellious Artists

If you were a mainstream artist or photographer living in New York within the last 200 years, chances are you wanted to showcase the best the city had to offer — the elite, the beautiful gardens, the fabulous hustle and bustle. But within each generation of creatives, a handful of artists rebelled, and insisted on showing to the world what NYC’s underbelly really looked like — this is their story.
Join New York Adventure Club on an art-centric journey through the three waves of artistic rebellion that occurred in New York between the 1880s and the beginning of World War II.
Led by Rena Tobey, American Art Historian and Professor at NYU’s School for Professional Studies, our digital showcase and art salon inside the Church of Sweden's hidden midtown chapel will include:

A discussion around the Social Reform movement, and how the photography of Jacob Riis and Lewis Hine rattled cages during what was known as the “City Beautiful” era

A look at the Urban Realism movement, with paintings by “The Eight” aka the Ashcan School, who captured the moment of enormous technological innovations that changed urban life forever

A conversation around the Social Realism movement of the Fourteenth Street School, with a birds’ eye view of the Depression from their studio windows overlooking Union Square

About Rena Tobey
Rena Tobey is an American art historian whose passion centers on making art accessible, insightful, and fun. She conducts lively, interactive tours of museum collections, including the Metropolitan Museum of Art, the New-York Historical Society, and the American Folk Art Museum. Rena’s research and writing centers on American women artists working before 1945, with particular interest in the challenges they faced in bucking societal norms.