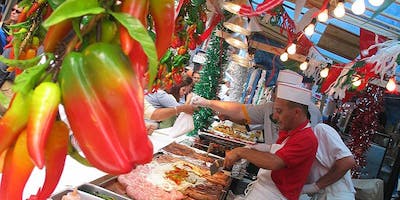 This is not a tour; it's an adventure! We're going to give you assignments to complete on this VELA. . .should be a hoot!
The Feast of San Gennaro, originally a one-day religious commemoration, began in September 1926 when newly arrived immigrants from Naples congregated along Mulberry Street in the Little Italy section ofNew York City, to continue the tradition they had followed in Italy to celebrate San Gennaro, the Patron Saint of Naples. His feast day is September 19 in the liturgical calendar of the Roman Catholic Church. The immigrant families on Mulberry Street who started the feast, a group of cafe owners, erected a small chapel in the street to house the image of their patron Saint. They invited all to partake of their wares, asking the devoted to pin an offering to the ribbon streamers that are hung from the statue's apron. This money was then distributed to the needy poor of the neighborhood. Over time, the festival expanded into an 11-day street fair organized and run by people outside the neighborhoodThe 89th Annual Feast of San Gennaro will feature live musical entertainment, food and cooking demonstrations and food eating competitions.
As always, make sure you have a metro card loaded with at least two fares. Bring spending money for the yummy food you are likely to want to eat while we wander!