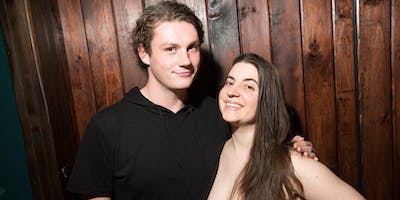 Fearsome duo Pamela Ross and Kendall Farrell host a rip roaring evening of jokes, music, and banter featuring some of the city’s most celebrated performers. Every Tuesday 8:30pm at The Graham in East Williamsburg. Free tix here: justcome108.eventbrite.com Featuring: KATE WILLETT (Netflix, Comedy Central)CALISE HAWKINS (Fallon, Comedy Central, FOX)CHANEL ALI (MTV, The Food Network)ASHLEY GAVIN (Hulu, FOX, AXS TV)GIBRAN SALEEM (MTV, TV Land, AXS TV)+ special guests! Right off the Montrose L/Broadway G stop. It’s not complicated. Just come!  This ish is free! Can you believe?? $5 suggested donation if you’re feeling wealthy. "One of the best alt comedy shows in Brooklyn! Kendall Farrell and Pamela Ross host this comedy show every week in the intimate wood-paneled back room of this East Williamsburg bar. With musical accompaniment from Sami Schwaeber and comics like Rachel Feinstein, Kate Willett, and Brittany Carney regularly on the lineup, the hosts do their best to make an inclusive space for female, queer, and POC comics.” - Vulture "You’ll want to come of your own free will to this weekly variety show featuring live comedy and rousing musical numbers. Helmed by Pamela Ross and Kendall Farrell from SiriusXM, this show brings in top-notch comedians that are about to become household names. Hot off festivals and shows like Just For Laughs, Comedy Central, Stand Up NBC and America’s Got Talent, this show is more than worth the $5 suggested donation. It all goes down at The Graham, a chill tavern where you can hang out or dance after the show." - IDK Tonight https://www.eventbrite.com/e/just-come-free-comedy-in-bushwick-ft-kate-willett-calise-hawkins-more-tickets-73712743801